When Does a Child Reach the Age of Accountability?

In our particular family unit, we allowed the children/grandchildren to win games when they are very young.  However, sometime between 5ish and 8sh, we welcome them into the real world and if they win at something, it is because they actually did win.

From playing Chess, Checkers, Card Games, Running, Soccer or any kind of game, it is a fun moment in our family to see our kids/grandkids enter the age of accountability.  Sometimes they win, sometimes they lose, but all the time they know that it is up to them.  They reach an age when there are no more easy wins.

This past Thanksgiving, my second grand daughter and I, agreed to a friendly competitive Jumping Jacks contest.  The first round, shortly after passing 310, she dropped out at 315.  The next day, after a huge Thanksgiving meal, and before dessert, I asked her if she wanted a re-match.

We began, and shortly after passing 400, a small crowd of family members gathered and began taking photos and helping us count.  Neither of us had ever passed into the territory of multiple hundreds of Jumping Jacks.  The land of 500, 600, and 700 was reached and crossed.  We were grinning at each other, as the family gathered and helped count.  Shortly after 800 she began to waiver and backed up a little too much and fell back on a step.  She didn’t rise, and was willing to concede, and a new Thanksgiving Tradition may have begun. 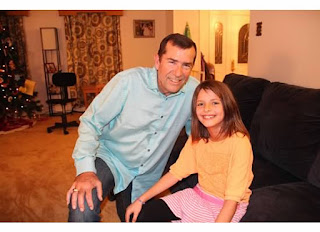 When and if she surpasses me in Jumping Jacks or any other game, she will have earned it.  It didn’t really bother her too much to lose, as she has already learned the real world of winning and losing in competitions.

She has willingly accepted the Lordship of Christ and by all accounts has reached her age of accountability and is beginning the process of growing in her relationship with God, through Christ Jesus.  In her family unit, physical exercise and healthy living is a part of who she is becoming.  It didn’t crush her spirit to lose a spontaneous competition with her grandfather.  She is resolved to continue becoming a healthy, physically fit human being.  If a spontaneous competition arises in the future, she will most likely be the winner, and it will be a reward for reaching the age of accountability and choosing to live her life in a rewarding way.
Posted by Craig at 12/03/2015 11:53:00 AM