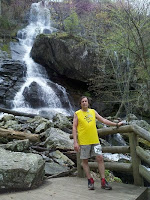 I probably could have finished a little faster if I didn't pause to take in the beauty of this waterfall, and plead with a hiker if he would take my picture and email it to me. The last time I ran this (2007), I vowed that if I ever made it back to this spot that I would take the time to get a picture, and the Lord provided with a really nice person. This is a little over a marathon distance at this point. I was really needing a break as this is a 4.1 mile climb, and it felt straight up, complete with about a thousand man made steps and a gagillion others. It took me about 2 hours to make it from aid station 6 to 7 and lots of people passed me. I was turtle slow and so I just enjoyed the beauty of God's creation, and encouraged the many people who were faster than I. I was just thankful to be here, as I am two years out of R-CHOP chemotherapy, and still have one more Rituxan chemotherapy infusion to go. Every so often I would touch my surgically inserted port and thank God, for His strength and grace. It was just a few months ago, that I had a break down and cried uncontrolably because my compromised health had taken me out of running altogether. (It's the reason my hair is so long. I am hoping to donate it once it gets long enough.) Running ultra's and overcoming cancer and chemotherapy have lots in common. 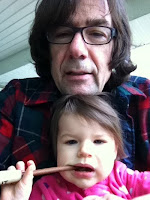 The day's prior were filled with grand daughter time as we hung out, fished and played. I found a new use for a turkey call as a teething item for my youngest. I was really hoping (and praying) a big striper would latch upon my grand daughter's lure, but it didn't happen (yet).

The day prior to the race was rainy and a perfect day of rest to prepare for the 50 K. My wife was gracious to arise early with me to prepare for the day at hand. We arrived in plenty of time and with the steady rain, I stayed in the car until the very last minute. As Dr. Horton led us in prayer I knelt in the mud to bow my knee and confess with my mouth the Lord Jesus' rule and reign over my once cancer diseased body then up the mountain in the dark we all went. I hadn't run over three miles since the Terrapin Mountain 50K because my left calf would really hurt after two miles, so it was another run of faith. I hoped my calf would respond to the rule and reign of God's kingdom, and it did! The first portion of the race (to me) was not as pretty as in the past because a weather front with very thick fog moved in. I was very thankful for the efficient placement of the trail markers for at times the visibility was about 50 ft. The fog and the gusting wind were a mild distraction from the race at hand. I was glad to have made it to the Sunset Fields overlook without any huge calf issues, and it was now down, down, down, down, and the fog lifted, the sun came out, and it was spectacular. I caught and passed a few people, and headed into the loop. I had to put on some podcasts to keep me moving as I went into a real energy lull. Two podcasts were on healing (Gloria Copeland), and one was on the eternal crowd (Joel Osteen) who cheers us on as we walk/run in faith. I could imagine that the eternal inhabitants of heaven according to Hebrews 12 were quite entertained as many of us run these things by faith. I also imagined my mother and father and recently passed member of our church, being able to witness the struggle and conquest of an ultra marathon. After those pod casts, and some refueling, I felt better and turned on some high energy music for the remainder and envisioned I was in an eternal outdoor stadium, with heaven's inhabitants cheering us on.

After the loop came the huge climb out of the valley mentioned above and it was soon to be all down hill. My calves were hanging in there, and the descent was so steep, I just let gravity pull me down, and kept praying that I wouldn't fall or make a misstep. Eventually, I made it to the gravel road, and it began to sink in, that by God's grace I was going to finish another miracle run, that I entered in early January, by a prompting by the Lord. The Lord had taken the years of cancer and treatments and had suddenly restored me to the ability to run at this level and it is still an amazing thing to experience. I have a hard time believing it really happened, so I doesn't bother me when others cannot believe that God could restore the years of cancer and chemotherapy in a moment. I was experiencing time redemption and I can only thank and praise God from whom all blessing flow.

About a quarter of a mile from the end, I saw a flattened Pabst Blue Ribbon beer can. This was my mother's favorite beer which she and Aunt Marilyn consumed a few million of before her days of Lupus, Emphysema and making peace with God. Whether it was real or imagined, I could hear my mother, like she used to yell in my high school track meets as soon as I would be making the last turn towards the finish line. Above every voice in the stands I can/could still hear her. "Come on Craig! Kick it in! Move it! Kick it! Come on! You can do it!

Well, finishing an 880 yard race in less than two minutes has a much different kick at the end than finishing a 50 K in 9 and a half hours, but I kicked it in as much as I could, looked over my shoulder to make sure no one was coming up from behind, and was blessed to hear my name being called by Dr. Horton and see my lovely wife as I made it the last few steps to the finish line.

Thanks be to God! 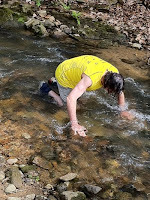 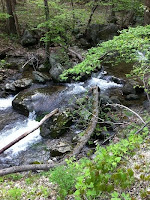 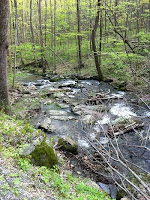 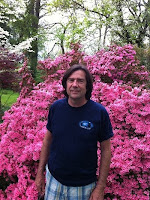 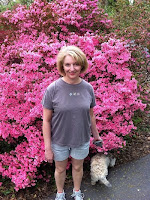 p.s. I am still learning how to insert pictures.
p.p.s. top picture (already explained), boat picture with my grand daughter Becca @ Smith Mountain Lake, smores cooking and eating with daughter and grand daughters, calling turkeys and teething, the finish line, the final finish, look of being done, kneeling in the creek to cool off and treat my legs, two pictures of the creek along the start and finish road, a cleaned up me, and a beautiful wife.

The bodily resurrection of Jesus is a "first fruit" of the bodily resurrection of every human being at God's appointed time in the future. This event, brought the future promise back into our sphere of existence, and we can, now by faith in God, through Jesus Christ receive salvation and all its 'attendant blessings'. The 'attendant' blessings include so much more than any human being can receive in their lifetime.

One of the 'attendant' blessings was the strength and healing from God to have run three 50 k's since a word from the Lord to follow Him back into ultra marathons on January 3 of this year.

A few of the memories from yesterday are:

My awesome wife arising at 3:15 a.m. to get me to the start and videoing, and compiling a short clip of the start. Also, being there at the finish, cheering me on, and driving the curvy mountain roads home at high speeds.

At a low energy moment listening to podcasts to lift me up. Gloria Copeland on healing (Proverbs 3 and Isaiah 40) and Joel Osteen ( Hebrews 12). Listening to my compilation of music, just one was "Pressing On" by Bob Dylan as I walked five miles straight up the mountain (Apple Orchard Trail up to Sunset Fields Overlook)

Witnessed and experienced the struggle and conquest of the human being at the 9500 ft. of elevation change over 31 plus miles. Experienced the friendship of like minded people, camaraderie of a unique sub-culture, friendly competition with one's self, and others, and crossing the finish line with nothing left in reserve.

Jesus lives, because God, the Father raised him from the dead. We have the promise of life, (eternal, abundant life), in a relationship with God, through Jesus Christ.

The act of giving a life to God and asking him to take it and do something with it, opens a person up to the life of adventure that only God could plan.

The truest celebration of Easter is to give one's self to God and ask Him to raise you up to live with Him in the heavenly places, all the while giving you the strength by his kingdom's rule and reign to follow Him into his mission.

On Saturday, I will attempt the third 50K of the year after the experience with the risen Lord on January 3. His bodily resurrection was a first fruit of the final resurrection to come and is the ground upon I will run/walk the Promise Land 50k on Saturday, April 23.

Physical strength and financial provision was included on the cross and resurrection and I ask you prayerfully consider giving a small portion of what God has blessed you with to the Cuban Bible College. Just a little bit, goes a long way, and anything you can do will help the future leadership of this vital island country move a little closer to freedom.

FYI: The Promise Land 50K starts and finishes at the base of some beautiful mountains of the Blue Ridge. The first one is Onion Mountain, and if you have ever driven along the Blue Ridge Parkway, the Sunset Hills overlook looks down into the valley we will run down and I will walk back up. If I come to mind on Saturday I would appreciate a prayer. There will be 9500 ft. of elevation change in case you were wondering.

If you can spare just a little of what the Lord has blessed you with, please go to viennaag.com, where you can make a donation. I would like to say to the leadership that the rest of the $5000.00 I felt him leading me to make a faith promise would all come in during this Easter week end. So far about $1500.00 has been given.