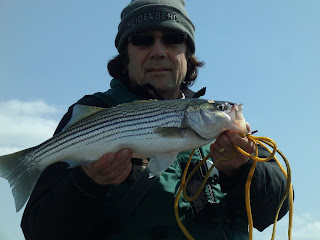 March 25, 2011: Friday afternoon, I took by wife, daughter and son-in-law striper fishing on Smith Mountain Lake. I had hoped they would catch one, but, unfortunately I was the only one. I landed a nice 21 incher and it was fun. The plans were to fish early afternoon, and eat dinner early so as to facilitate a good night’s rest.

We were challenged by my daughter to a game of hearts in which she informed us, she “would take us to school”. Growing up as a child it was one of mom’s favorite games, and I was very rusty, but quickly remembered. Brenda plays it often on the computer and instead of being schooled, we schooled her, badly. We headed upstairs as Jakob barely beat her in ping pong and retired early. I have never not had some kind of issue right before any attempt at an ultra marathon and this one would be unique. My sleep would be drastically interrupted. I had a “Proctalgia Fujax” moment that pulled me out of a deep sleep. This is a rectal cramp that is unimaginably painful. (you don’t want one of these) I have fainted with them before. (I faint easily) I quickly quoted from memory Isaiah 53:5 and 1 Peter 2:24 reminding myself that “by his wounds we are healed” and “by His wounds you have been healed” and walked around the living room praying. I have needed to lean and trust in scripture for much worse pains and sicknesses and sorrows and I still marvel that Jesus bore all my sins, all my sorrows and all my sicknesses. I took some vitamin I (Ibuprophen) and after 15 minutes of pain meds, prayer and scripture quoting, it subsided enough to attempt lying down again. (They normally last for hours.) Fortunately, I was able to get a little sleep until our 4:15 a.m. wakeup. I had laid out all my gear ahead of time and after dressing, we headed to the start. The deer were out in herds, and the trip was uneventful as we made our way to the start. I had to make an emergency potty stop on the side of the road, and when I saw the lines to the restrooms, I was glad I did. The weather forecast included everything from light rain to snow to cloudy with a high in the forties. 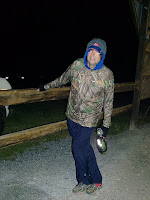 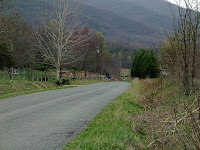 Brenda was crying with positive emotion, once she realized it was me, and that I was okay. It was the first race any of my children had been able to come to, and it was quite the blessing to jog the rest of the way in being escorted by my wife, daughter and son in law 8:43:09 after beginning. I thanked the race director for a well done race (I also told him he was a crazy man for designing this thing) and began to realize the immensity of the miracle of grace that had just occurred. My son-in-law, Jakob noticed the medal
was the outline of a turtle. I didn’t until that moment connect that Terrapin Mountain was known as a turtle mountain. Since I am as slow 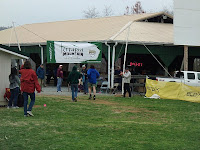 as a turtle it fits. On one hand it was good I didn’t have a clue as to the difficulty of the race, but on the other hand it would have been a little more helpful to have studied the course and listened better to the pre-race instructions. I think it is called cognitive dissonance. I heard it, but didn’t hear it. They had some freshly smoked pulled pork sandwiches and as I sat down to feast, heard, then saw that Diane hadn’t been pulled and was about to finish. I asked Brenda to take her picture and to bring her over and it was a happy reunion, as we shared about the race with my family. True to form, Diane could talk with a smile on her face, about the adventure and we all connected around a common love of life. I was getting chilled, and the two pork sandwiches had joined the eight gooey nutrition packs and various food supplies each aid station offered. So, with some hugs and good byes, Brenda and I headed home while Diane headed back to Nashville and the kids headed back to our lake house. Back at the car our little Cairn Terrier was quietly waiting in her crate. I am still thinking of giving a pet dog to both Dr. Horton and Dr. Zealand, as they love to have dogs at all their races so much. (maybe not). Since one of them already has a pet buzzard trained to monitor the Summit Punch station, they may not need another pet. 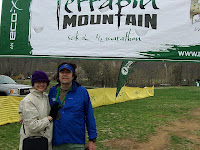 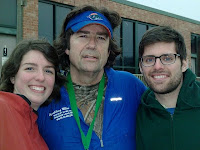 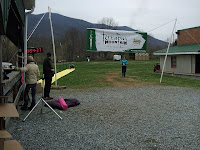 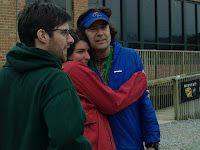